WASHINGTON, Aug. 15, 2017 /PRNewswire/ — The world population will reach 9.8 billion in 2050, up 31 percent from an estimated 7.5 billion now, according to projections included in the 2017World Population Data Sheet from the Population Reference Bureau (PRB). 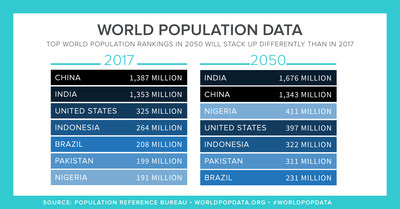 PRB’s 2050 projections show Africa’s population will more than double to 2.6 billion by 2050 and account for more than half (57 percent) of the global population increase by that date. The number of people in Asia will rise about 750 million to 5.2 billion, while Europe (including all of Russia) is headed for a population decline from 745 million to 736 million. The population of the Americas is seen increasing to 1.2 billion from 1 billion now, and Oceania (which includes Australia and New Zealand) would rise from 42 million to 63 million.

This year’s Data Sheet includes a special focus on the world’s youth. Here are a few key figures:

About PRB: PRB informs people around the world about population, health, and the environment, and empowers them to use that information to advance the well-being of current and future generations. Find out more at www.prb.org.