“Building quality projects and making friends from all over the world” has been the goal and commitment of POWERCHINA, the world’s largest builder of power facilities, in its overseas operations. The company is actively involved in the construction of the Belt and Road projects and has expanded its construction business to African countries. Apart from improving waterways, supplying electricity, and building roads and bridges, the firm has been fulfilling its social responsibility to local communities in the overseas markets.

POWERCHINA has been contributing to the local realization of the UN development goals by driving employment through new hydropower infrastructure, developing skills of local people through trainings, providing assistance in education and care of orphans, building hospitals and donating medicines. Its efforts to spread love and hope in Africa have helped it establish sincere friendship with local governments and people.

The Djibloho Hydropower Plant, which is hailed by the government of Equatorial Guinea as the “Three Gorges Project of Equatorial Guinea,” meets 90 percent of the country’s demand for electricity and is an important engine for its economic development. POWERCHINA trained local employees and helped them learn skills. A two-month Chinese training session free of charge was also provided by the company to facilitate communication between local operators and Chinese engineers, and help local employees better operate the equipment of the plant. 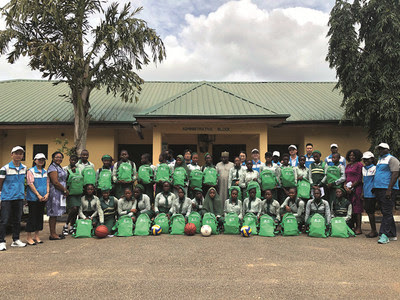 In Cameroon, POWERCHINA’s office has a heart-warming tradition. Around Christmas and New Year’s Day each year, the office would cooperate with member companies of the group to hold voluntary activities in schools and orphanages in the areas along the roads it is building. They would repair classrooms and donate stationery for the children, and sing and dance with them to celebrate the New Year.

According to Ngangoua Serge, POWERCHINA’s representative in Cameroon, the company cares about the disadvantaged groups in Cameroon. Since it began operating in the country in 2010, the company has held similar donation activities every year, in a bid to bring love and happiness to children in need.

The company has also helped improve local medical conditions in places where its projects are located by building hospitals and donating medicines and facilities.

New Niefang Hospital, a landmark Chinese Government aid project in the country to be completed by POWERCHINA by 2022, will strengthen the medical system in central Equatorial Guinea and will provide quality medical services to residents in and around the city of Niefang.

On January 29, 2019, the company’s Equatorial Guinea office assisted the Chinese Embassy and the Chinese medical team in the country to carry out a free clinic at the company’s camp for Djibloho Hydropower Plant. The free clinic held with the assistance of POWERCHINA is a testament to the friendship between the two countries and a manifestation of the active fulfillment of social responsibilities by Chinese companies in Equatorial Guinea.