BEIJING, Dec. 6, 2021 /PRNewswire/ — Leping, the county-level city in Jingdezhen, Jiangxi Province has been entitled as “The Hometown of Gan Opera”. It is also known as the hometown of ancient theaters for its nearly 500 existing ancient theaters. Because of the large number, splendid arts and unique style, these theaters have been acclaimed as “one of the best in China” and “the most distinctive cultural heritage of Jiangxi province”, and Leping is therefore also called “The Museum of Chinese Ancient Theaters”. Recently, Jiangxi saw its first large water ancient theater established in Leping city. With an area of 105,000 square meters, this theater and the local 4A-level tourist site Hongyuan Wonderland complement each other and blend into one, which becomes a unique cultural tourist attractions with the integration of opera culture and natural landscape. 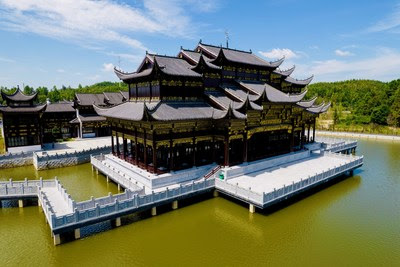 The water ancient theater follows the traditional establishment of the ancient theater in Leping and is a large wooden building. It consists of two courtyards and is divided into two functional areas: the performance center and the exhibition hall. The performance center is made of the ancient and elegant stage and observation deck, ancient boats and bridge pavilion as well as main guest room and a chamber; the exhibition hall is established on a quadrangle behind the central axis of the ancient theater. With a traditional and simple pattern, the whole structure is sparse in the front and dense in the back, short in the front and tall in the back. The theater has a double-sided stage, which can serve for performing arts activities such as rural tourism festival and autumn concert.

Relying on Leping’s ancient opera culture and with the theme of “retro, ecology, cultural tourism”, this theater integrates the development of ancient opera culture-related products, leisure and tourism, local custom and culture, science education and interaction and other functions, to create a tourism experience of “touring the mountains, the water and the fairyland, and enjoying the stage, the drama and the landscape”.